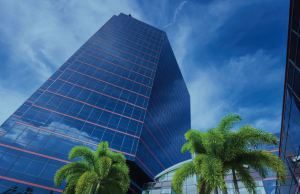 T he Force is awakening at the old Darth Vader building in downtown West Palm Beach.

Plans are in the works to do a major upgrade of the Northbridge Centre, the 21-story office building informally named after Luke Skywalker’s father, thanks to its ominous black-glass exterior. Inside, however, plans are to brighten the 515 N. Flagler Dr. tower with a $10 million upgrade. The goal is to lure new office tenants to the city’s downtown, before talked-about new office towers start rising during the next couple of years. City business and government leaders have been crying for months there’s not enough office space in the city’s core, prompting developers such as The Related Cos, Charles Cohen and Jeff Greene to draft or consider plans for new office towers.

But owners and brokers at Northbridge say there’s plenty of space in their waterfront building, especially for those coveted hedge funds and private equity firms that the county’s Business Development Board is trying to hard to lure. “We’re the last game in town, and we’ll be the best game when these renovations are completed,” said Peter Reed, managing principal at Commercial Florida Realty Services in Boca Raton.

“With nearly 100,000 square feet of vacancy, we’re the only building with any appreciable waterfront space left in the market,” added Angelo Bianco, managing partner of Boca Raton-based Crocker Partners, a co-owner of the building. Commercial Florida is representing Northbridge, along with Tower Commercial. They are working to draw attention to the sometimes-overlooked property that was acquired last year by Greenfield Partners of Connecticut and Crocker. The companies paid $68.24 million for the 294,000-square-foot building, which includes a separate four-story pavillion with a rooftop garden.

Northbridge, which now houses a number of law firms, is about 70 percent leased. The property was built in 1984. Plans are afoot to make the building physically as appealing as those waterview vistas, Bianco said. For starters, gone will be those red stripes on the outside of the building. (Darth Vader didn’t have them;; Northbridge soon won’t have them, either.)

Inside, plans are underway to build an upscale conference center that will be able to hold about 140 people. The roughly 3,000-square-foot space will feature all the latest high-tech gadgets and will serve as a building amenity to tower tenants, Bianco said.

Crocker also will add expand the health club and build a brand new café. Bathrooms and floor lobbies will be upgraded and new elevator cabs put in, Bianco said. Bianco said the building is well-positioned in the market. Physically, it’s right next to the new Flagler Memorial Bridge, which is nearing completion.

Once this north bridge opens, Reed said it will provide less congested traffic flows with easy access to the property, compared to other office towers clustered around the middle bridge at Okeechobee Boulevard.

Rents at Northbridge go for around $30 per foot not including taxes, maintenance and insurance. That’s about $20 per square foot less than buildings such as Phillips Point or CityPlace Tower, where rents start around $50 per square foot, Reed said.

Not surprisingly, Northbridge’s’ brokers are going after the same tenants everyone else in town wants: Mid-sized tenants needing 3,000 to 7,000 square feet of space. The building upgrades are expected to be completed by May 2018.