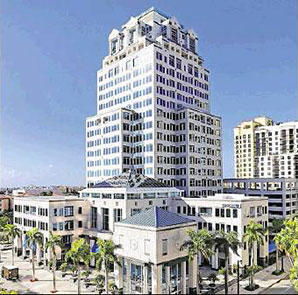 T he Esperante Corporate Center in downtown West Palm Beach has sold for $491 a square foot, second in price per square foot to nearby Phillips Point, which sold last year for $546 a square foot.

The Esperante Corporate Center has traded hands for the second time in three years, selling to a New York firm for $125.75 million, a whopping increase from the 2013 sales price of $71 million.

RedSky Capital of Brooklyn, N.Y., is the new owner of the 256,100-square-foot trophy building at 222 Lakeview Ave.

RedSky owns and develops real estate mostly in the New York area. This is the company’s first office building in Florida.

The high price paid for Esperante “is indicative of the market. We’ve had an excellent recovery over the past three years,” said Peter Reed, managing principal of Commercial Florida Realty Services in Boca Raton.

The $491 per square foot price is a record for Esperante, but not for West Palm Beach. The Phillips Point office complex at 777 S. Flagler Drive sold last year for $245.5 million, or $546 a square foot.

At Esperante, new leases include Bank of America/Merrill Lynch, a plum deal for 29,000 square feet of space that filled the building.

Prior to that, the building inked deals with tenants such as Cole Scott Kissane, a law firm that leased 50,000 square feet; and Chatham Lodging Trust, a publicly-traded hotel real estate investment trust that leased 27,516 square feet.

This is especially the case with properties such as Esperante, the Phillips Point office complex and CityPlace Tower. At Esperante, for instance, rental rates are $59.50 per square foot, according to a recent study by JLL.

There is some space available at other buildings, such as the former Bank of America Centre at 625 N. Flagler Drive and the Flagler Center complex at 501 S. Flagler Drive.

But those buildings are filling up, too: Integra Connect LLC, a cloud-based software company for medical specialties, is taking 14,000 square feet at the Flagler Center complex.

Prices remain high for downtown office buildings because although there’s talk of building new office towers, nothing has gone up.